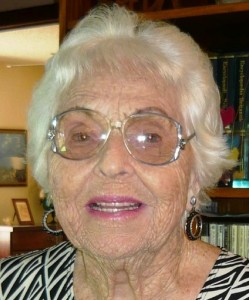 Claira Nelson departed this world, but not the hearts of the people who loved her, to favor the angels with her smile, on June 19, 2014 at the age of 98.  She was born in Flat Ridge, VA, the daughter of  Floyd  A.  and Minnie James Cornett.  She married Fred B. Nelson on August 14, 1934, and enjoyed their farm until they decided to move to Woodbridge, VA, in 1964, to be near their Girls.  Claira enjoyed  caring for her first grandson Jeff for a few years and then moved to Arlington, VA. She loved and lovingly cared for the Miller Twins, Michelle and Gordon John,  from infancy until they entered Kindergarten. Claira’s last job was with the City of Alexandria, VA, School System from which she retired in 1978.
The most important things in Claira’s life was her love of God and her family and friends. On December, 15, 1986, she and husband Fred moved to Merritt Island, FL, to be near their daughter Freda and her husband Bill who helped her with caretaking of Fred who was suffering from Alzheimer’s Disease.  She was preceded in death by her beloved Husband Fred; her Son-in-Law Bill Schildroth; Grandson Robert Ruetz; her parents; baby Brother Charles Vernon Cornett; and three Sisters, Ruby Greer, Kathleen Funk, and Virginia Farmer.
Living in Florida brought Claira a lot of peace, security, and happiness and she was able to visit and enjoy many of the beautiful sights of Florida and the Eastern United States.
It brings peace to her loved ones to know that she is in Heaven, pain-free, and has reunited with the love of her life, her beloved Freddie.
Claira is survived by her loving daughters Shirley (Lou) Kurtz of Independence, VA, Betty (Malcolm) Lukowski of Ottawa  Lake,  MI, and Freda Schildroth of  Merritt Island, FL;  Brother Floyd (Jane) Cornett of Wytheville, VA; Grandchildren, Jeffrey Brewer and Kimberly Ruetz;  Great Grandchildren Zachary Ruetz, Matthew Ruetz, and Julia Ruetz;  Step-Grandchildren Kara Sweeney and Rachel Hasting; six Step-Great Grandchildren; three Step-Great Great Grandchildren; Michelle and Gordon John Miller (“her special twins”), and numerous other relatives and friends.
Claira’s family is especially grateful to The Palms of Florida, LLC (Jeannette and Maggie) who so lovingly cared for her for the past three years.
Island Cremations and Funeral Home of Merritt Island, FL, did a wonderful job preparing her for transport to Reins Sturdivant Funeral Home in Independence, VA. Claira’s viewing and funeral will be there and she will be buried beside her husband at the Cornett Cemetery in Comers Rock, VA.